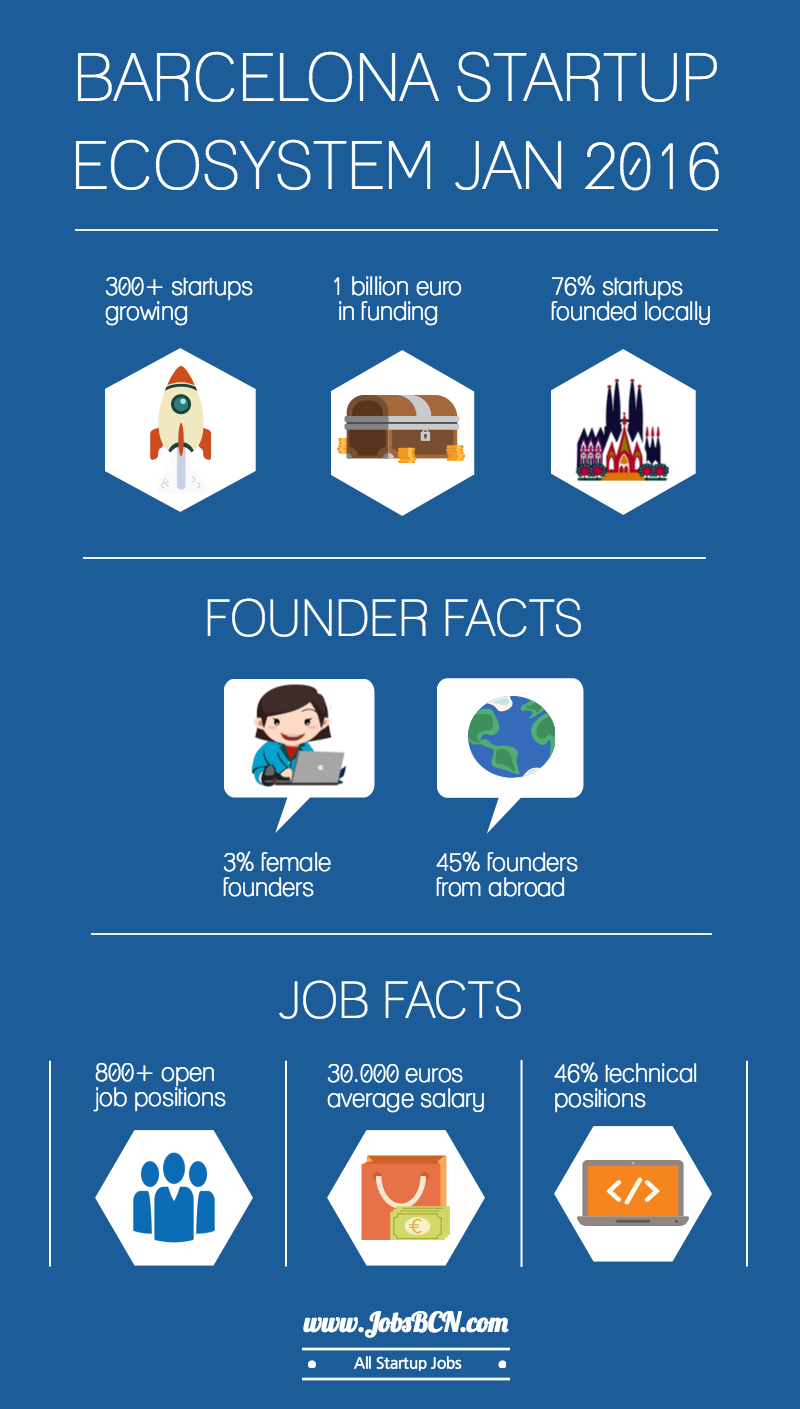 Do you know how many startup founders in Barcelona come from abroad? How many women are among them? And,  how many jobs create the top startups in the city?

To answer some of these questions I have been collecting information from various sources and I’ve found some interesting data about the Barcelona startup ecosystem that I’d like to share with you.

There are more than 300 startups in Barcelona listed in JobsBCN but for simplicity’s sake I have taken the 100 biggest startups to do our study.

Where do Barcelona startups come from?

The ecosystem, as we can see, is fueled from the inside. The startup fever has caught entrepreneurs living in Barcelona, and a remarkable 76% of the top 100 startups have been founded in the city. Other cities colonizing the ecosystem are London (6%), San Francisco (4%) among others (14%), whose startups open headquarters in Barcelona to expand internationally.

Where do Barcelona startup founders come from? 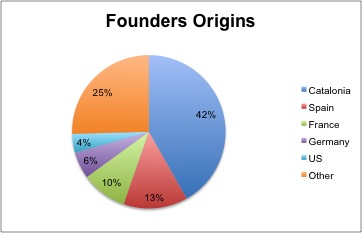 That’s another remarkable feat that gives us a hint about the health of the startup hub that is Barcelona. Not only startups are being created almost on a weekly basis but their founders have grown in the city. However, most of them co-found their projects with a fellow entrepreneur that is not from Barcelona. For 74 catalan founders in our top100 startups there are almost as many founders coming from other countries (79) and also a significant number of founders coming from different regions of Spain.

This confirms, from our point of view, that Barcelona attracts foreign talent and local entrepeneurs are benefiting wisely from it.  They are founding hand in hand startups with other entrepeneurs that give tremendous value in terms of experience and background, something that otherwise would be harder to find in an all-catalan ecosystem.

No one questions that the tech sector is going to play a fundamental role in job creation over the next few years, specially in countries that have not fully jumped into the trend. Inside the tech sector though, startups are also creating jobs in good numbers. As more venture money comes to the ecosystem more talent is needed. The top 100 startups in Barcelona have 580 open positions as of today. Barcelona born startups make an average of 5’3 new positions each, while International startups a bit more at 6’7.

This number varies all the time depending on the fortunes of the different startups, but tends to grow steadily. It is also important to note that half of this positions are for technical roles. This complicates the prospect for Barcelona startups because hiring technical talent is quite difficult in the city with much more job offers than candidates (ratios of 8 offers for just 2 candidates are common).

What % of Barcelona startup founders are women? 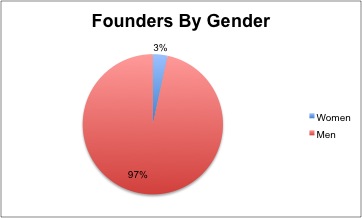 That’s the most hurting statistic of all. Women account for just 3% of the founding pool (In the top 100 Barcelona startups there are 171 men and only 6 women). This is something that should be corrected with time as government and local councils are doing efforts to bring entrepeneural spirit to current and new generations. But one has to wonder, wouldn’t it be worth to make a special effort to attract women to the ecosystem? as Bill Gates once famously said in Saudi Arabia in front of an all-male audience: “if you’re not fully utilizing half the talent in the country, you’re not going to get too close to the Top 10”.

Not long ago a couple of them won a recently created award Premio Mujer TIC, of course we are talking about Maria and Eva Martín co-founders of Tiendeo other notorious succes story among women entrepreneurs is Glòria Molins Founder of Trip4Real, the cool marketplace for local experiences.

More on the Barcelona startup ecosystem

So far, the 300+ active startups in Barcelona have raised 1 billion euros and are creating 800+ jobs (of which 50% are for technical profiles), and the average salary a startup pays is $30.000 a year, you can see these companies here.

Our blog always try to shed some light, or give useful information on topics that haven’t been studied before around startups in Barcelona, here are some examples:

January 25, 2021
We use our own cookies and cookies from third parties to measure your activity in this website and improve the service through analysis of your browsing activity. If you continue browsing, we consider that you accept their use. You can change this configuration and obtain more information here.