If you have walked around Barcelona lately I’m sure you have noticed a high presence of cyclists delivering stuff somewhere. Maybe it’s just me, absolutely immersed in the world of startups that notices this, or maybe it’s just coincidence, but I’m seeing more and more of this people riding all over the city in branded bikes. If you don’t belive me pay attention, as a battle for the last mile delivery spectrum is unfolding in Barcelona right now. You will see startups like Take Eat Easy, Glovo, Deliveroo, Unplis and more trying to lead the charge.

We don’t know yet, but the battle has claimed one victim already, and this is none other than the biggest unicorn of all, Uber. Not long ago it anounced the shut down of Uber Eats in Barcelona, a delivery service they implemented in the city after Uber was deemed illegal in the country in 2014.

It’s not a good sign see Uber go for other competitors. What did that mean? was it the pressure Uber had after the court battle that didn’t make it work? was it a bad execution? or was it simply that the spanish market was not ready for this kind of businesses?

For the effort investors and entrepreneurs put in making it work you can tell they are smelling blood. Can the Postmates model be replicated in Spain? or the Instacart model? it is all but obvious that it has to be tried, but I’m not sure these services fit in a mediterranean culture, specially when speaking about food where everyone loves to go out and have it by themselves in restaurants and bars.

But leaving aside speculations, which are the players determined to win this space? I’m going to make a list of the startups focused either on delivery for anything (concierge model) or the ones focused on food delivery that either have offices in the city or have been founded here.

Founded in London in 2012, this startup has already received $200 million in funding, 100 of them just last november. Now it starts operations in Barcelona and other spanish cities and you already can see their people making deliveries along with big ads on public transport and other places.

Deliveroo brings meals to your house in 32 minutes. It has partnered with selected restaurants that normally don’t offer a takeaway service. Then you choose one from their app and it’s delivered to you. As I said before, it will be a challenge to make this a sustainable business in Spain because of culture fit. I don’t see legions of spaniards switching their customs by ordering a meal, for not substantially a cheaper price than a normal restaurant, and eating it at home instead.

Maybe millenials and subsequent generations will change that, but I think it’s still a long way to go before this model succeeds in Spain. 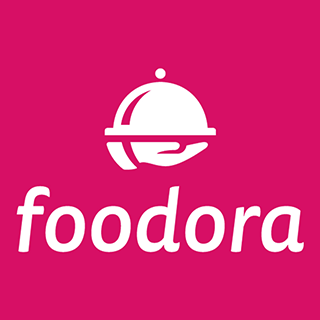 This time is just 30 minutes what you have to wait untill the food arrives. Foodora is backed by Rocket Internet, founded in Germany in 2014 and merged with Delivery Hero in 2015.  Rocket Internet is expanding agressively via its subsidiaries in the food delivery market. In Spain it acquired la Nevera Roja via its owned company Foodpanda for a reported €80 million.

La Nevera Roja connects restaurants with delivery service with customers whereas Foodora partners with selected restaurants without delivery service so they assume the delivery part and charge it to the customer. I assume Rocket Internet is trying to get all the spectrum of the food delivery market as fast as it can, and in many countries. It will be a market where the old adage “the winner takes it all” applies so at Rocket Internet they are hurrying themselves to secure as much marketshare as they before other players come to the party.

(update: Foodora has of lately ceased its operations in Spain, we can count it out of the battle)

This one comes from Brussels and a few months back started operations in Barcelona. Considering it got a nice $18.7 million round of funding (Rocket Internet also an investor here) this startup competes with the other two, and offers basically the same, food delivery from selected restaurants in just under 30 minutes, 28 on average to be precise. Remember, Deliveroo 32 minutes, Foodora 30 minutes, Take Eat Easy 28 minutes.

This is a battle in all fronts, trying to differenciate to one another as they all have very similar products. You can make your bets.

Here we are moving a bit from food. This startup is the spanish copycat of american Postmates, promising to deliver anything you ask them in about an hour. Postmates has raised $138 million so far and was founded in 2011, Glovo has raised $2.3 million but was born in 2015, and got a revenue of 230.000 euros, so quite a journey already despite being so young.

Following Postmates model, Glovo works as a concierge app that will bring you anything in about an hour for a fee. Also you can ask them to go pick up something you need, for example the jacket you forgot in some place (as I did), so it’s not just buying you can use your imagination as well. I can think of many situations where this could be useful, and maybe permanent partnerships with brick and mortar shops that don’t offer delivery might be the road for success. There’s a lot of work to do to make this market bigger and they are not waiting for that to happen just by themselves. Glovo has merged with JustBell, another startup that was doing similar things created by Antai Venture Builder founders Miguel Vicente and Gerard Olivé, famous for building many successful startups, Wallapop being the most notorious one.

Glovo is probably the best positioned of all to take the lead in the Last Mile Delivery space. It is making some good moves and is starting to be recognized not just by early adopters.

One startup that hasn’t even begun its operations but that has already raised $25 million. Stuart, Born in 2015 in Paris under the guidance of Dominique Leca, founder of Sparrow, is not waiting to test their product just there, they go all the way to other markets because otherwise it would be too late.

It also replicates Postmates model, and will present battle to Glovo as they are building a strong team in Barcelona to launch very soon.

Yet another Postmates copycat, Unplis is perhaps worse positioned than the others to make its mark in Barcelona as it hasn’t started operating and doesn’t have the funding the other two have.

As of today their site is announcing that soon we’ll have their fleet of couriers ready to get you anything in less than 60 minutes, even though they are already serving customers. According to its founder, Josep Casas, since august the app has been downloaded 15.000 times and in january alone it served 2200 in Barcelona. It would be interesting to know more of these numbers from other competitors to know how big is this market right now and what are the future prospects of growth. Unfortunately, it’s not the typical thing that young startups disclose specific numbers unless they are very favourable in terms of PR.

It woudn’t be surpirisng if we see one of theses startups pivoting soon to another model if a competitor takes a firm grip to the market.

Deliveroo is the one spending the most on ads here and it will certainly payoff as it becomes difficult to differenciate players from one another just for what they do. So many difficulties will have these startups differenciating one another that I’m quite sure a non accostumed customer might think that Glovo and Deliveroo are doing the same thing while in essence they are quite different.

It’s going to be interesting to see how this battle evolves and which new players enter the contest. Or leave it. We are now in the precise moment where a new market is opening up in front of our eyes, and just one competitor will emerge with the top spot having obliterated the rest of the field.

who do you think will become the leader in the last mile delivery space?

If you feel like joining one of these startups checkout their open positions here: Glovo, Take Eat Easy, Unplis, Deliveroo, Stuart

April 04, 2022
We use our own cookies and cookies from third parties to measure your activity in this website and improve the service through analysis of your browsing activity. If you continue browsing, we consider that you accept their use. You can change this configuration and obtain more information here.